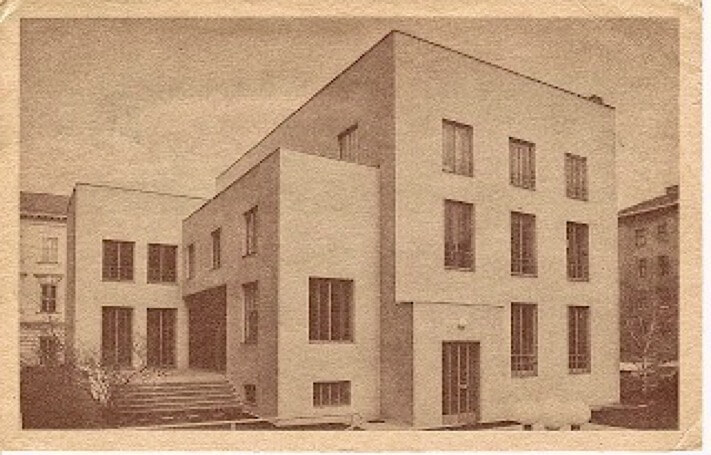 Ludwig Wittgenstein’s sister’s house in Vienna is a stark but stately concatenation of cuboid blocks which now forms part of the Bulgarian embassy. It was designed in the mid-1920s by the thirty-seven year old Wittgenstein—an engineer before he became a philosopher—and his friend Paul Engelmann, an architect. Between them they were responsible for the design of the entire house, not just the interior, as I previously suggested (“What a difference a new drawer makes”).

But Wittgenstein did take a particular interest in the fittings. The door handles and window-catches and radiators were made to his exhaustive specification, and he insisted, when the building was all but finished, on raising the ceiling in one of the rooms by just three centimetres. Time and money were clearly no object. It was before the Great Crash, before the Anschluss, the events which effectively destroyed the prosperous late Hapsburg world into which Wittgenstein was born. There was plenty of time to be a perfectionist, if you came from a certain social background.

Yet, as Wittgenstein wrote later, in one of his notebooks:

You can’t build clouds. And that’s why the future you dream of never comes true.

A number of readers wrote to correct the account I gave of Wittgenstein’s role in the house project. The precision of their corrections is true to the spirit of its subject. It’s impelled me to locate the source books—which were still boxed-up when I was writing the earlier piece—and find a place for them on my newly installed shelves. And to revisit some of Wittgenstein’s odd, haunting aphorisms.

As a designer Wittgenstein would certainly have had a view about bookshelves, though he was not particularly fond of books as such (he spent little time reading the work of other philosophers, preferring American pulp fiction).

He had this, for instance, to say about the limits of taste:

Taste can be charming, but not gripping.

He would have known, no doubt, that a bookshelf must be at least 25 cm high and 20 cm deep if it is to accommodate standard-sized hardbacks—taller and deeper if large-format books are to go there too. He’d have had a precise idea about the relative thickness of horizontals and uprights in a bookcase. And he would probably have had an opinion about the ordering of the books.

Thus he might well have preferred his own works to stand alongside those of Raymond Chandler and Erle Stanley Gardner (or his favourite detective writer, the less well-known Norbert Davis) rather than between those of Simone Weil and Mary Woolstonecraft—which is where they are consigned, on my shelves at least, by the sometimes tenuous distinction between literature and philosophy, and the invariant order of the letters of the alphabet.

One of the problems of shelving and reshelving books is constant distraction of this kind. You can spend a long time rearranging books, or just gazing at them without ever opening them. You can move them around till dawn—as you can move words in a sentence, or sentences in an article. And once you start reading them your sense of time—mine anyway— goes right out the window.

Maybe it’s just as well, then, that I wasn’t able to get at my books last week: the piece might never have got written. To a bibliomane, or a lover of learning, books are drugs. A shelf of them is like a pharmacist’s store cupboard. Once you sample the wares the next thing you know it’s already supper time and you are half way up the stairs with a cricked neck, in a trance, buried in a book again.

If you are supposed to be writing something yourself, particularly if you have a deadline, this is the point where you start to wonder, in a self-consciously agonised way, why you are making such an effort to add still more to the world’s great word pile, its vast heap of written and printed matter. After all, you already have shelves of stuff there in front of you, waiting to be read and understood. Most of what is written, you reflect—including what you write yourself—involves repetition of and variation on received ideas. Most things have been said before. The words themselves grow tired.

Sometimes an expression has to be withdrawn from language and sent for cleaning—then it can be put back into circulation.

Something like this could be said, in some cases, about entire books. And reading Wittgenstein can make you wonder whether it is really books that you should be concerning yourself with at all. Shouldn’t you do something else with your life, with your valuable, unrepeatable time of being, something other than this writing and reading?

Wisdom is cold, and you can no more use it for setting your life to rights than you can forge iron when it is cold.

Having half my books in storage has been a good thing. It’s given me new eyes for them. Apropos Wittgenstein, I’m happy to have reencountered two books in particular. One is Ray Monk’s estimable biography, Ludwig Wittgenstein, from which I gleaned much of the information summarised above; the other is the book that contains the remarks by Wittgenstein that I’ve been quoting. It is a collection of aphorisms and opinions extracted from his notebooks, published posthumously under the title Culture and Value.

Edited by George Henrik von Wright, a Finnish philosopher who succeeded to Wittgenstein’s post at Cambridge, and translated by the late Peter Winch (1926-1997), Culture and Value is the slightest and least well-known of Wittgenstein’s works, but it is easily the most accessible to non-philosophers. Reading it sitting on the stairs all evening may put your neck out of joint, but it won’t make you feel like a dullard, as Wittgenstein’s major works can do.

I’d quote more from it, but Wittgenstein’s executors have always discouraged the use of material from Culture and Value. Although they allowed a selection of the aphorisms to be published some years ago when I was editing the literary periodical Quarto—including those above—I learned recently that they refused permission for anything from the book to be reproduced in John Gross’s Oxford Book of Aphorisms.

This may seem mean-spirited of them, but I think I see why. A book of aphorisms, of short paragraphs, is too easily assimilable to sound-bite culture, to the realm of the buzzword and the catchphrase—or the newspaper column. An aphorism, though it may be the same length as a sound bite, should be its opposite. It is not something to be taken in a hurry. Wittgenstein himself makes a point of this, if not quite an aphorism:

We can see here that the command of detail that he brought to bear on furniture and interior design is matched by his insistence on the exact disposition of punctuation marks in prose. Both are intended to give you a better grasp on things, to help you locate yourself more precisely in physical or conceptual space.

So let’s do as he says and slow down. Shake out our limbs and our brains. And stretch the wings of thought.

Wittgenstein has this advice for people who aspire to think:

This is how philosophers should salute each other: “Take your time !” ✭