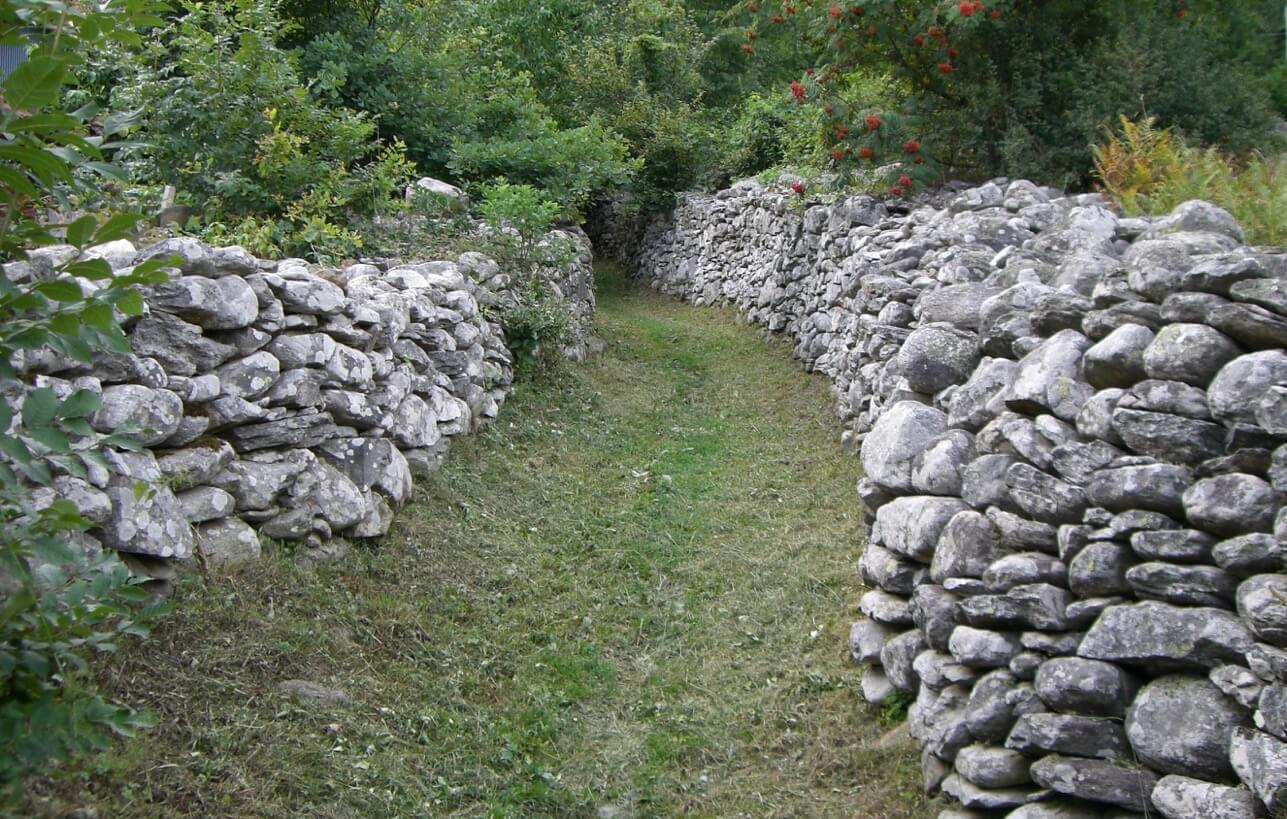 In “Mending Wall”, his poem about the limits of neighbourliness, Robert Frost writes

Something there is that doesn’t love a wall
That sends the frozen-ground-swell under it,
And spills the upper boulders in the sun….

I spent a good few summers in my childhood walling and ditching with my father on the west coast of Scotland—on the shores of Loch Sunart—helping him lift and roll boulders from an abandoned quarry on the piece of land we owned there, or drag them up from the beach at low tide, to make paths and mark boundaries and raise outbuildings.

This month, a quarter of a century on, we went back—my father and mother and myself—to visit the place again, to see how much of the stonework was still in place, and how much had been dislodged by time and weather—how much of it, in Robert Frost’s phrase, had been spilt in the sun.

In northern England meanwhile, in Cumbria, the environmental sculptor Andy Goldsworthy has been organizing a new dry stone-walling project, on an epic scale. In this instance the walls are built partly for protective purposes and partly under the aegis of art. The project involves the construction, or reconstruction, of a hundred sheepfolds and pinfolds—pens for impounded livestock—at sites across the county. 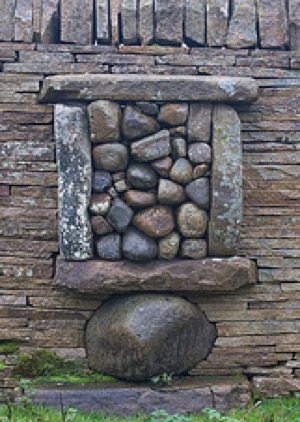 Some of them will be settings for sculpture made  from the same materials as the original folds, from field boulders and slates; some will be restorations of the original enclosures, intended to reestablish their original function of corralling sheep. (A number of the old sites of folds are now found in town centres, engulfed by urbanization and framed by modern masonry.)

Andy Goldsworthy’s project is in keeping with Cumbria’s reputation for innovation in public art. It combines ancient local skills with the ideas of one of the most inventive sculptors at work today. Compare Goldsworthy’s sheepfolds, if you will, with Damien Hirst’s now-notorious livestock-in-formaldehyde. Hirst’s fairground hucksterism is revealed all too clearly when it is set against Goldsworthy’s subtle acknowledgment of agricultural history, of the craft tradition and the power of landscape.

Hirst’s sheep and cows are empty provocations, but Goldsworthy’s sheepfolds are an inspired act of cultural recycling. In a manner comparable to the incorporation of the walls of pagan burial grounds into churchyards in the early days of Christianity in Britain, Goldsworthy’s project reconsecrates these ancient sites of livestock husbandry in the light of the contemporary veneration of art.

Dry-stone walling and the art of words

Dry-stone walls run tens of thousands of miles across the uplands of Britain, guarding boundaries and framing the land, as characteristic of our heaths and moorlands as hedges are of the lowlands. Such walls may have their enemies, as Robert Frost suggests, but it takes a long time before they crumble. This is just as well, since they take a long time to build. And a lot of stone.

The base of a dry-stone wall needs to be half as wide as the wall is high. The waller builds, in effect, two walls, one sloping back towards the other, with an in-fill of pebbles and long lockstones that are laid from side to side, bridging and anchoring the two. They are capped by a layer of heavy, cunningly-chosen coping-stones. By definition, no mortar is used in a dry-stone wall; the waller’s art lies in the choice and disposition of the stones alone, so that they settle well against each other. The stones must rhyme: the art of walling is, it does not fall.

As Robert Frost indicates in “Mending Wall”, Jack Frost is the enemy. In Britain this warning applies, particularly, in the Cotswolds, where the building material is soft Jurassic limestone. But it’s not so much the ground swell that Frost describes that brings these walls to grief: it is the effect of rain and snow-melt freezing in cracks in the coping stones. In the case of Cotswold stone in particular the stones must be laid sloping outwards so they drain rapidly, before the freeze sets in. 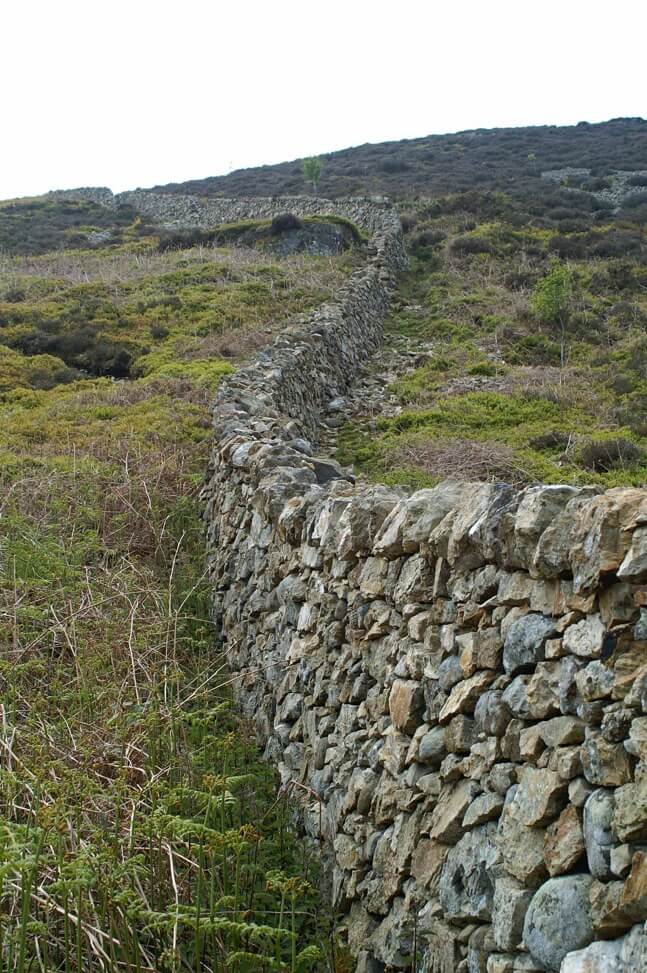 “We have to use a spell to make them balance”

When my father and I tried our hands at dry-stone walling in Ardnamurchan two decades ago we were only half aware of these aspects of the craft. Luckily the rock is harder there. But it was with trepidation, all these years later, on a brilliant August afternoon, with the sun on the hills and a flat calm on the loch, that we set off to reexamine the walls and the boathouse and the jetty—the jetty was the toughest of the three to build—that we’d made a quarter of a century before.

We walked down from the road to the foreshore. The lower reaches of the jetty, we could see from a distance, had been depleted by winter storms; but the boathouse was intact, with the new owner’s sailing boat nestling among the invading yellow flags and bracken. A small tree was growing through the roof, but the walls were sound. And our drainage ditches were still keeping the bogland at bay.

To find something you have made become part of the landscape, to know that it will stand and be of use when you’re gone—this is the satisfaction a dry-stone-waller has. There’s an echo of it each time a walker in the mountains puts a stone on a cairn to mark a path. A poet may have this satisfaction too—certainly a poet like Frost who has popular success in his own lifetime. Frost was a poet of the demotic tongue; he wrote himself into the popular imagination; his poems speak of rural labour, the ambiguity of boundaries, of our dependence on nature, and our vulnerability to it, both the nature without and the nature within us.

When we work with unhewn boulders, Frost writes in “Mending Wall”, we must “use a spell to make them balance”. And this, I think he means to suggest, is true of lives as well as walls: well-chosen stones can keep walls safe from frost; well-chosen words protect our souls from harm. ✭

In 2016, my nephew Tom Walmsley revisited our old family property at Rhu Beag (the name means “small point of land” in Gaelic) in Laga Bay, on Loch Sunart. He found most of the stone work of the 1960s was intact, and the boathouse still in use.