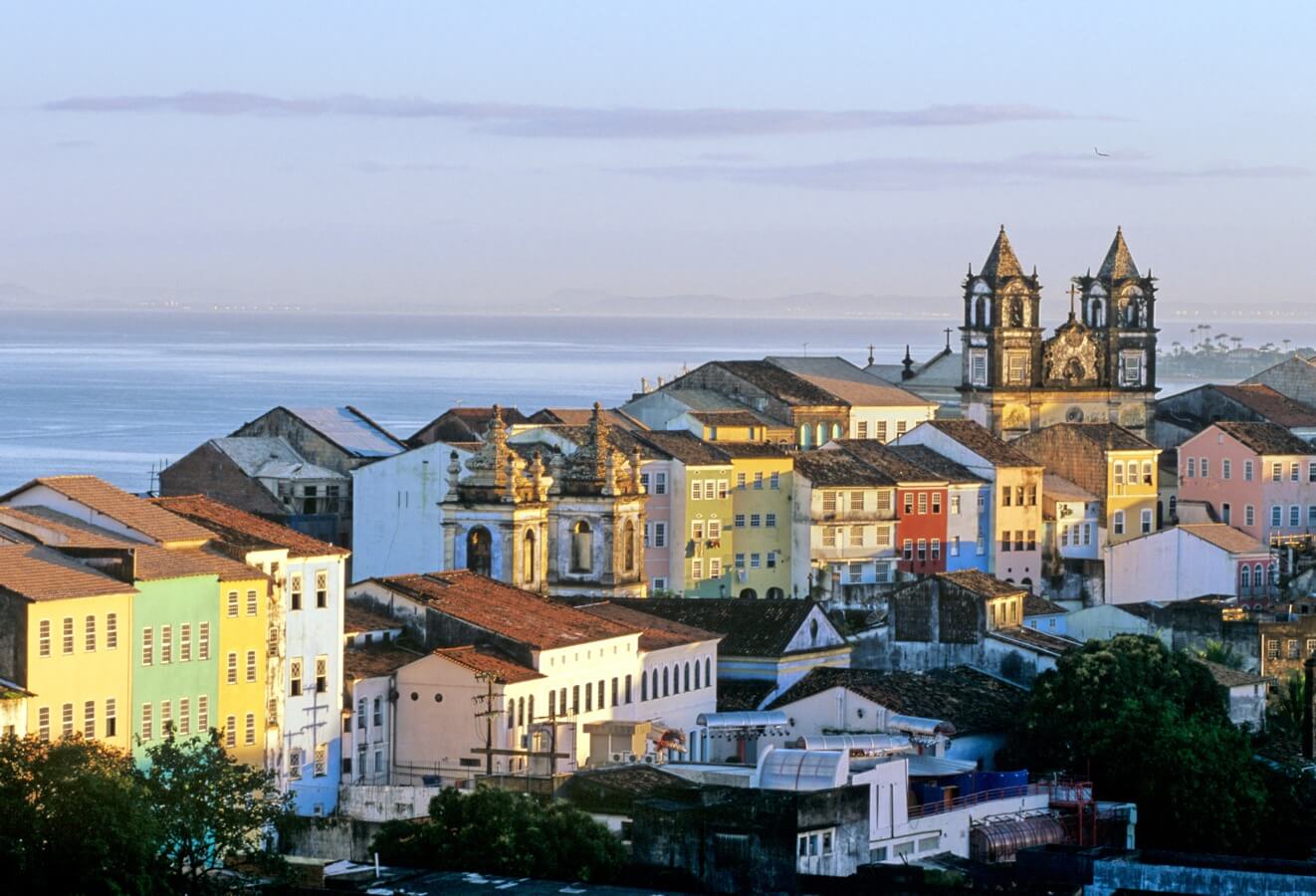 At breakfast in the Hotel Anglo-Americano, a five-dollar-a-night hotel in Salvador da Bahia, the café con leche was thin and weak, the milk reconstituted from powder, the butter on the verge of rancor, but the view across the Bay of All Saints was astounding, uplifting, heart-stopping.

The weather worked ceaseless changes on the waters of the bay, transforming them from a sheet of zinc to a pool of quicksilver, then to a polished shield of bronze. When rain came the air turned to water and the land to lead. Sea breezes flayed the surface to the texture of chain mail, speckled with rust where tankers lay at anchor. At the Anglo-Americano, lingering over breakfast, the alchemy of time and weather made mornings pass like mist.

On a steep slope below the hotel, on the claw of land at the mouth of the bay where the city lies, there grew a single ancient tree—I hope it still grows there—tangled in creepers, dripping with vines, with lovebirds and parakeets flitting back and forth in its carapace of green. The tree was the last survivor of the Mata Atlantica, a thick coastal forest that once stretched from Rio de Janeiro to the mouth of the Amazon.

A century and a half ago this forest had a profound effect on a visiting English naturalist, Charles Darwin. It was Darwin’s first landfall in the new world. The port of Salvador—near the north-eastern tip of Brazil—was his first glimpse of tropical vegetation. He was charmed beyond measure.

“The day was passed deliciously,” he wrote. Then he added: “But ‘delicious’ is an insufficient word.”

The forest that beguiled Darwin—that once ran the length of Brazil’s Atlantic coast—is gone now. Still, Bahia remains a lure to those attuned to the genius of place and the attractions of the tropics. (Bruce Chatwin describes it at length in The Viceroy of Ouidah.) Many visitors stay there longer than they mean to, as I did. Some of them, like the great French photographer and ethnologue, Pierre Verger, stay for good. 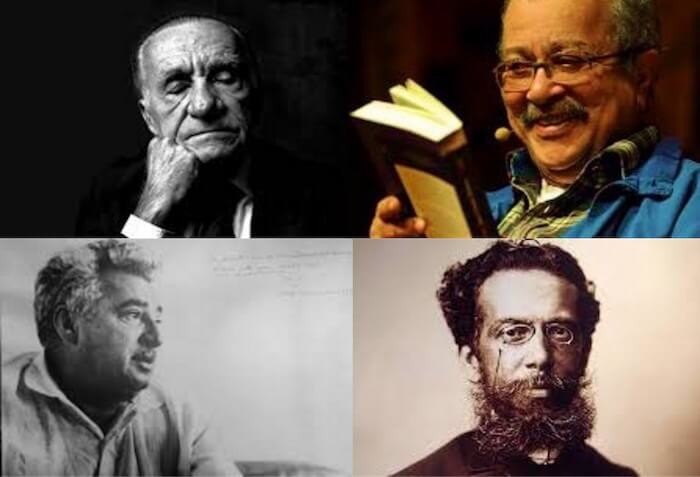 In the late 1980s I arrived in Salvador from Europe, with a backpack full of books, a set of clothes, and a desire to learn Portuguese. How I longed for the miracle of Pentecost, the gift of tongues that would free me into a new language. At breakfast those mornings in the Anglo-Americano I gazed alternately at the sublime view of the bay, with the last forest tree in the foreground, and at a poster on the wall that reproduced the text—then still impenetrable to me—of a poem by João Cabral de Melo Neto, most celebrated of Brazil’s living poets.

The poem was “A Educacão Pela Pedra”, “Lessons from Stone”, a short, austere lyric on the hard life in the rocky lands of the interior—a very different world from the lush view of the bay from the window of the breakfast room. Later, I spent a long time trying to translate João Cabral’s poem, unraveling its deceptive simplicity and wrapping it in English words. I began to understand the oft-noted resistance to translation of the key works of Brazilian literature. During those first mornings at the Anglo-Americano, though, it felt like a reproach to my indolence and monoglottism.

The trance of the breakfast table may have served a function. Salvador is a city of trances; before getting to work on the language, you need to let the place get to work on you. This is the most African part of Brazil; the population is more black than white; Catholicism is inextricably mixed with African religions; the yearly street carnival is a fantastical riot that makes carnival in Rio look staged. Lusotropical syncretism, the hybrid modernity of Brazil, is at its most potent here.

Bahia is the birthplace and inspiration of many of Brazil’s greatest popular musicians—Caetano Veloso and Gilberto Gil most prominent among them—and of two of its most celebrated modern novelists, Jorge Amado and Jõao Ubaldo Ribeiro. When I prayed for fluency in Portuguese I prayed to a local saint, Nosso Senhor do Bonfim, our Lord of the Good Ending, who is identified in Salvador with Oxalá, one of the Yoruba divinities that feature in the temples of Afro-Brazilian religion. These places of worship outnumber the many churches in the city. On Fridays, in honour of Oxalá, half the population of Salvador walks the streets dressed in white. 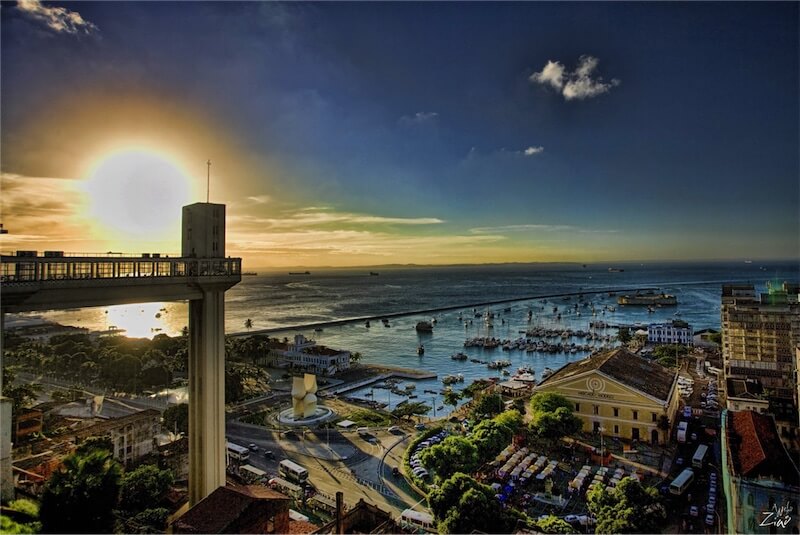 If you have read any of the novels of Jorge Amado, the presiding literary presence in Bahia, you will get the idea. His work is imbued with the Afro-Brazilian spirit of the city. Jorge Amado is the most translated of Brazilian authors, probably the most translated of all writers in the Portuguese language. In English, here in England, his novels—the later ones—seem sentimental, magical realism for middlebrows; but when you are in Salvador, learning Portuguese, they take you in a sweet, irresistible embrace. You have no option; you are surrounded. Streets in Salvador are named after characters in his books (as some streets in Rio de Janeiro are named after characters in the works of Brazil’s great nineteenth-century novelist, Machado de Assis). Songs are composed and carnival floats designed on themes taken from Amado’s oeuvre.

Soon after I arrived in the city, I attended the opening of a cultural centre dedicated to his work, the Casa Jorge Amado, in Pelhourinho, the heart of the old city. Late in the evening Amado himself, appeared, unnoticed, at a high window, his white hair lustrous in the moonlight, gazing out over the roofs, the streets that bore the names of characters he had devised: the novelist and the city, each inventing the other.

Across the bay from the city of Salvador lies the island of Itaparica, a low and jungly place, which is the source of the city’s bottled water and the centre of the Afro-Brazilian cult of the dead. In the small town at the far end of the island, in those days, lived Jorge Amado’s only rival, a younger Bahian novelist, João Ubaldo Ribeiro.

João Ubaldo was no slouch. Each day he worked from the small hours until dawn, that time of the day when the bay of All Saints begins its chameleon changes. Later he would repair to the town square in Itaparica to drink Old Eight whisky and discuss politics and the weather. I spent some afternoons with him there and learned a lot about both. A former sociologist, João Ubaldo wrote a column in the local paper and—uniquely in Brazil—translated his own novels into lively, demotic, English. (He still does, though he no longer lives on Itaparica). He was a man with the gift of tongues; I envied him.

Now there is a useful guide to English translations of fiction from Portugal, Brazil and Africa. Brazil gets the lion’s share; this is only right. Eleven novels by Jorge Amado are listed and discussed (others from his vast output are more easily available in the United States). There are three novels by João Ubaldo. And ten by Machado de Assis, a novelist who certainly merits his place in the global literary pantheon. There are works by another forty-odd Brazilian authors. For a literature so little-known a surprising amount has been translated. Brazilian literature is one of the world’s undiscovered treasures. And now it is not so hidden as it was. Perhaps you, too, are drawn to it. You could begin here. Beware, though, it may be a long road that you are starting down. ★