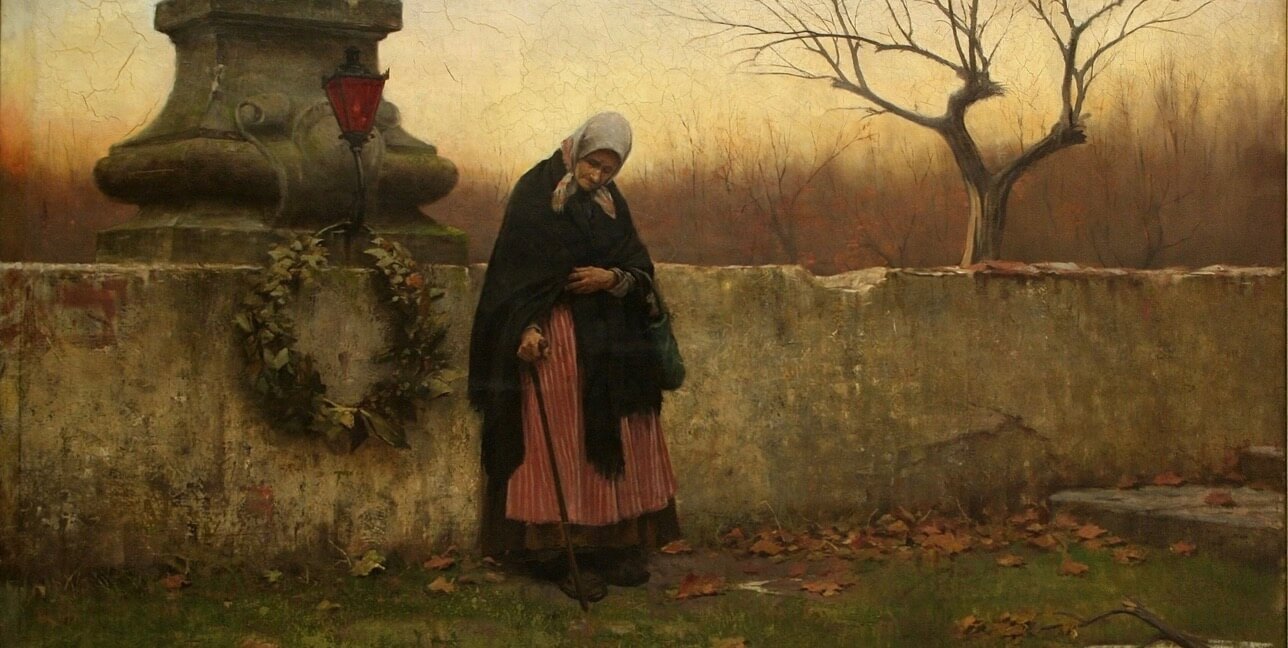 More people alive today than in all of human history? An intriguing notion, but it’s not the case

More people alive today than in all of human history? An intriguing notion, but it’s not the case

In June, on St Vitus’ Day, in this column, I aired the interesting-if-true notion that the number of people alive in the world had come to exceed the number who were dead. Within our lifetimes, according to this theory, the demographic scales have tipped, so that today we outweigh the ancestors. If this were so, I wrote, it would add to our sense of unease at the acceleration of daily life under the influence of information technology—and maybe help explain it.

It turns out, though, that the premise of the argument was wrong. I’ve done more research, and now, with the Day of the Dead bearing down on us, I must retract the notion. The number of the dead in that estimate was a radical underestimate. Alive, we number a mere five and a half billion (five thousand five hundred million, that is). It turns out that the ranks of death are more numerous than this by a factor of ten or more. The best available estimate puts the figure for the departed at more than sixty billion. That’s a lot of candles to light on the day of remembrance.

I owe the new calculation to Mr A. R. Thatcher, former Registrar General of the Census Office—new to me, that is, but not to him. In his elegant paper “How Many People Have Ever Lived On Earth?”, which he contributed to the forty-fourth session of the International Statistical Institute in Madrid in 1983, Mr Thatcher demonstrated convincingly that at no point so far in human history can it have been true that the living were in the majority.

The Census Office, he points out, has been counting the dead in England and Wales since official registration began in 1837. The number of recorded deaths between then and the early 1980s was over 73 million, well more than the present population of 50-something million. Thus, in England and Wales at least, on the evidence only of the past 150 years, it cannot be true that more people are alive than have lived.

What of the rest of the world? Mr Thatcher does not stop with Britain. Using historical mortality rates established by two Hungarian demographers, G. Acsadi and J. Nemeskeri, and population estimates derived from a variety of historical and archaeological sources, he derives a total number of deaths for thirty-four slices of time between 40,000 BC and the present. He then adds these together to make the sixty billion estimate.

“No great claim can be made for the precision of the result,” writes Mr Thatcher. “However, the errors can hardly be so large as to invalidate the conclusion that the number of people who have lived before us exceeds the present population by a whole order of magnitude.”

Mr Thatcher (who points out with some asperity that he is not related to the former Prime Minister), wrote his paper a decade ago, but when I spoke to him a few weeks back he was confident that his conclusion still held. Other estimates are higher. Alex Shoumatoff, for instance, in The Mountain of Names, puts the figure for the dead between 69 and 110 billion.

I’m not the first person to have spread misinformation on this subject. How does it come about—such a radical misconception about the relation between the living and the dead, this persistent factoid, this mytheme?

World population is now doubling in less than a single lifespan. If it had always done so then it would indeed be true that the number of people living would be greater than those who had died. But of course it has not, the speed of increase is recent. So the erroneous notion is based partly on a backward extrapolation of present-day growth rates which can easily be shown to be false.

Lazy or hurried writers such as myself have also, I think, been tempted to adopt the idea of a tipping point in global population because it seems to contain the seeds of an explanation for our present discontents, our proto-millenarian tension. In particular it seems to justify anxiety about overpopulation, not simply on ecological grounds but on some kind of metaphysical principle.

In the eighteenth century a comparable speculation led to a dispute between an Edinburgh clergyman, Robert Wallace, and the philosopher David Hume1. Robert Wallace, reiterating an assertion by Sir Thomas Browne a century before, in his essay Urne-Buriall, argued that the population of the modern world was less than that of the ancient world. Hume doubted it. With no figures to support his case—the discipline of statistics not having yet been invented—he was sceptical of factual assertions on either side. In his essay Of the Populousness of Ancient Nations, however, arguing from first principles, Hume wrote: “The prolific virtue of men, were it to act in its full extent, without that restraint which poverty and necessity imposes on it, would double the number every generation.” 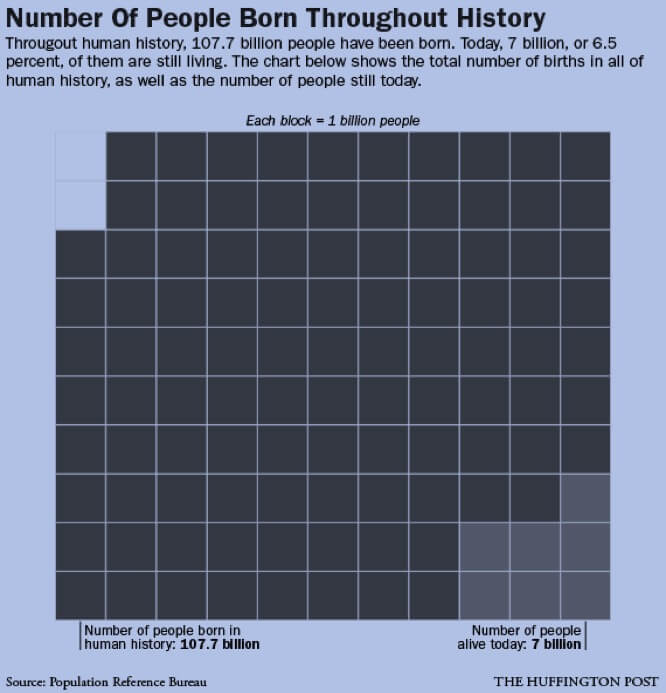 Revised estimate from 2014 of the number of people born throughout history. Source: Huffington Post

Hume’s pre-Malthusian prophecy has now more or less come to pass. If exponential population growth of the kind he imagines continued we could, in theory, yet reach the point, in five or six generations (that is, a couple of centuries) where the living really did outnumber the dead. With that many people in the world, life would surely hardly be worth living. No one believes this will happen. But it is possible.

Orion is rising in the East now. In a week or two it will be All Souls’ Night, when the dead walk. The idea of sixty or more billion dead souls is a lot to handle. Add to this total the five or six—soon to be seven—billion of us who are still living and the total is more than sixty-five billion souls that have either passed or are still passing through this world.

And that is not to speak of the sixty-five billion bodies, or what’s left of them. Most of these have come to dust, or soon will; but the remains of a good number still lie in coffins, urns, sarcophagi, towers of silence, killing fields, landfill and cryogenic repositories. If you put all those remains end-to-end—or even side-by-side—they’d stretch from here half way to eternity. ★

Forget the giant sundial—here’s a programme for the real millennium.