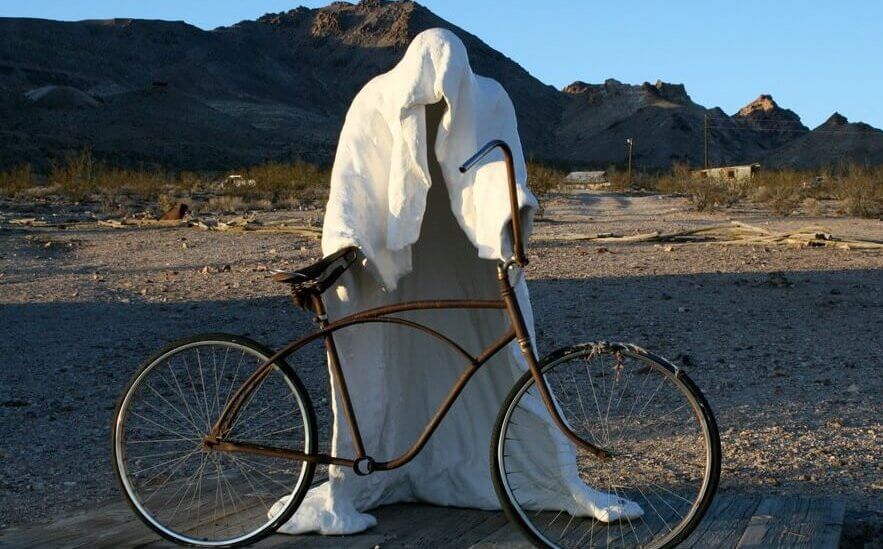 The last thing I saw before I rolled my bike and fell in the path of an oncoming truck was the statue of the gunner at Hyde Park Corner—a callipygous nude that dominates the war memorial complex on the traffic island there.

For the past eighty years this statue—erected after the First World War—has, with a certain hauteur, turned its backside on the ceaseless flow of vehicles where London’s Park Lane debouches into Piccadilly and Knightsbridge. Would that one might make as good-looking a corpse as this—if, that is, one were to have the misfortune to be among the dozen cyclists mown down and killed by motor vehicles in central London each year.

But it was not my lot to join the gunner in the ranks of death, not this time. I totalled my bike, and broke my collar-bone, but managed to roll out of the path of the truck and survive to ride again, many weeks later, down the cycle path in Hyde Park, through the memorial arch and onto the gyratory of death, where the gunner’s statue looms above the mad traffic, amid the fumes and din, a young god on a field of battle.

And a battle is what it is. In a war without heroes, a civil war between motor vehicles—car on car and truck on truck. Autogeddon is what the poet Heathcote Williams called it in his epic poem of that name. And it’s cyclists who bear the brunt of the conflict. We’re the civilians, cannon fodder in the car wars. Cars claim every thoroughfare as their free-fire zone. And cyclists—non-combatants without a territory of their own—are unwillingly caught up in the conflict. Hyde Park Corner, with its looming monuments to the dead of other, far greater and grimmer wars, is an apt location in which to be forcibly reminded of these dangers. There should be a monument to martyred cyclists there.

Cars and trucks are killing us by degrees

Here’s how I came to grief that day. Another cyclist, blindsided by the truck, turned sharply to avoid being crushed beneath its wheels; and I swerved to avoid him. Tangled up with each other, we both fell. As we dragged ourselves and our crumpled bikes from the roadway and onto the safety of the pavement we exchanged glances of appraisal and concern, expressions of solidarity between members of an oppressed minority. Motorists, I fear, are unlikely to have behaved in the same manner. They’d have traded angry words and referred the matter to their insurance companies. But the cyclist I collided with untangled his bicycle from mine and, despite his own injuries—and those to his bike—helped me on my way to A&E to have the collar bone seen to. 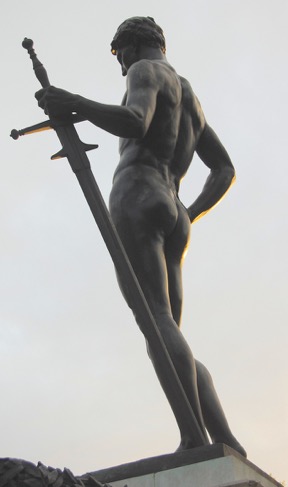 My father is a doctor, and has a doctor’s typical cheery optimism. While the bone was setting he told me that the break in my shoulder was liable to give me grief, on and off, for the rest of my days.

“Never mind, though,” he added helpfully, “think how good you’ll feel on the days it’s not bothering you.”

In the event the broken shoulder hasn’t been bothering me too much, or not yet. The new ridge in the mended clavicle acts like a tiny body implant, a warning of how fragile we are. It’s a reminder that organisms are miraculously self-healing, unlike cars and bicycles. Slowly we repair ourselves. And the ridge in the bone tells the body to take its time.

But here’s the crucial question: can we find the time—and can we summon the will—to repair the damage that cars are doing to our lives, every day?

Several of the candidates for Mayor of London, lobbied by the London Cycling Campaign, have committed themselves to imposing a twenty mile-per-hour speed limit in town. A bicycle can go faster than that, of course, but, for my part, I’d willingly renounce the pleasure, as long as car-drivers did so too. The insensate desire for speed is one of the things that blind us to the carnage that cars cause.

And a lower speed-limit is just a start. Something needs to be done about the giant eurotrucks that loom suddenly out of the dark like Godzilla. Confronted with these monsters, a bicycle is like a dinghy in the path of a supertanker. It’s too easy for the drivers of such huge and unwieldy vehicles to sideswipe your bike and run you down without even noticing you’re there. This is how a significant proportion of the cycling fatalities in London happen.

In the ranks of death

It’s not just for the sake of cyclists that we need these changes. It’s for the sake of motorists too. Trapped as they are in their mobile cages, car drivers become sullen and enraged, like captive animals. This degrades their social skills and shortens their lifespans. They should not be abandoned to this fate. After all, motorists are pedestrians too. And they may well be cyclists. And vice versa. We are them. And they are us. And cars and trucks are killing us all by degrees.

What we need in London—and every other city in the world—for everyone’s sake—as everyone surely knows—is a cheap, efficient, twenty-four hour public transport system. Then we need draconian restrictions on private vehicles in the city centre. We need tunnels and cuttings (for motor vehicles, not for people) and proper cycle routes—not those narrow lanes next to the gutter that stop after a hundred yards, propelling cyclists back into the path of careening motor vehicles. And, finally, we need many more pedestrianized areas.

When it comes to the London mayoral race, I’m a single-issue, reclaim-the-streets voter. I’ll support whoever has the most radical and credible transport policy. Because I really, very sincerely, do not want to be killed in a traffic accident. Better to fall off a cliff. Better to be lost at sea. Better to die at your desk. Better, when it comes to that, to be cut down, like the machine-gunners memorialized at Hyde Park Corner, in a hail of bullets on some foreign field.

In addition to a good death at an advanced age, I would like very much, while I’m alive, to be free to enjoy in safety my harmless, pollution-free, environmentally responsible means of transport, travelling from home to work and back. I’d like to be free to breathe air unfouled by exhaust, and glance as I pass at the city’s many pleasing statues.

And I would like to be free from the need to write in such a vein, free from the risk of irritating you—honourable motorist, noble cyclist, fellow pedestrian, esteemed reader—by repeatedly pointing out these self-evident, yet woefully neglected truths. ★

The original version of this article incorrectly identified the sculptor responsible for the statue of the Machine Gun Corps Memorial at Hyde Park Corner as Charles Sergeant Jagger. Charles Sergeant Jagger (a collateral relative of Mick Jagger) was responsible for the remarkable Royal Artillery Memorial, which forms part of the same complex of statues at Hyde Park Corner; but the statue of the Machine Gunner is the work of another sculptor, Francis Derwent Wood.