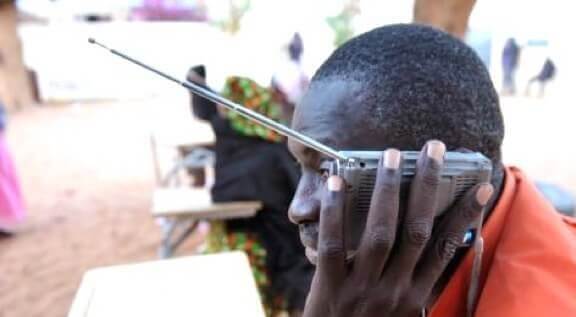 The Cinderella of public radio is a precious
national asset. It should be celebrated, not cut.

An inventor on Eel Pie Island just announced that he has designed a wind-up radio, driven by clockwork.

For those in the lands of the south, living beyond the electrical grid, where power cells are expensive and don’t last long, a clockwork radio is a vastly more important innovation than a pocket-sized video camera, or other high-tech wonders of our time. In such places—in most places—people have radios for two main reasons: first, to listen to local music stations; second, to tune in to the BBC World Service. Local music radio, with low set-up costs, cheap programming and revenue from advertising, is profitable, a growth industry; the BBC World Service, on the other hand, transmitting news and feature programmes in forty-one languages on dozens of wavelengths, is not.

The World Service needs constant financial support—and merits it. It’s not just that it reaches more listeners than any other broadcasting body–a hundred and thirty million in the countries where they can be counted, plus a few million more in China. It’s the fact that these listeners believe, with some justification, that the BBC offers unbiased information, unaffected by considerations of policy or commerce, and uncensored by any government, including our own.

It’s been said before, but being true, bears repetition: BBC World Service Radio is a great national institution; one that can make you proud to be British, when maybe not much else does. 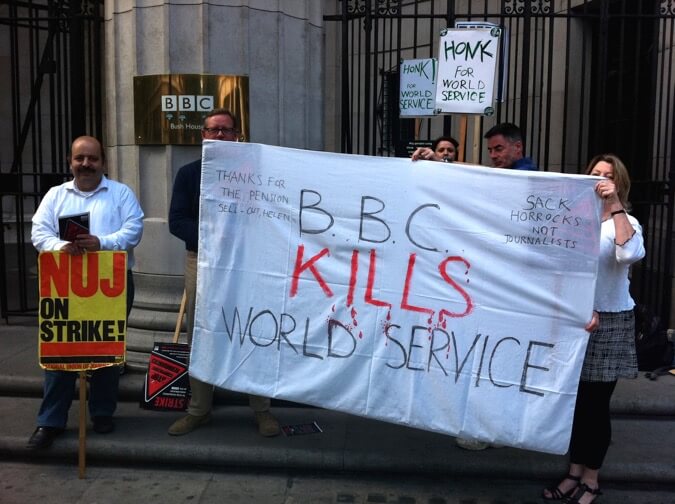 Not, however, if you are a member of the present government, which, in November, by way of celebrating the extraordinary global influence of the World Service—and the record number of listeners it clocked up last year—cut its £25 million capital budget by 20%.

£25 million to win a hundred million hearts and minds. 25 pence per listener. That’s the equivalent of 0.1%—one hundred-thousandth—of the UK defence budget.

The problem is that the World Service is not financed by the BBC licence fee, but rather by a direct grant from the treasury, so cutting it is an easy thing for a government to do. The resultant five or six million pounds shaved off public expenditure is hardly going to save the government at the next election. Yet it seems the World Service—an irreplaceable, yet obstinately unrealizable national asset—must be punished for the present government’s coming electoral defeat.

World Service radio is the Cinderella in the new world of the BBC. This now includes BBC Worldwide Television, ugly sister to the World Service. BBC Worldwide TV—note the absence of the word “Service”—is commercially sponsored. In Asia it is in bed with Rupert Murdoch’s Star TV and locked in a Hertz–Avis style competition with CNN. It lacks the unique authority of World Service radio. And you need cable, or a satellite dish, to watch it. Radio is a more democratic medium than television. And, content-wise, BBC World Service Radio is a superior channel too.

I should declare an interest—albeit marginal. I’ve been working for the World Service for the last two weeks in Laos and Cambodia, making a series of documentary programmes about anti-personnel landmines. But any freelance journalist who has worked for the World Service will confirm that financial calculation doesn’t come into it: no one would work for World Service radio just for the pay. The rates are as low as they get. That’s why it can do what it does for so little. For foreign news coverage, trading on its reputation, the World Service depends on armies of stringers, without job security, who work for the BBC because it enables them to hold their heads up when they say they are journalists. It is their dedication that maintains the BBC’s preeminence in news gathering.

Those who have lived or worked in countries where local media are constrained by repressive governments, by lack of skills, or by lack of means understand this loyalty on the part of listeners and reporters. Like me, they will remember fiddling with the dial, trying to find a clear frequency in some remote place where there was no other way of knowing, say, who had won the election, whether the airport was open, or whether the rebels were advancing or retreating. And all of us recollect wondrous moments in some remote location when work stopped—the tiller in the field, the merchant in his shop, the governor in his office, the commander in his jeep—when they all downed tools to listen, rapt, to the news from London.

Accurate information, like clean water, is an indisputable good. Without it political development is impeded and education wasted. In this respect the World Service does more for development than most aid programmes. It’s remarkable, really, that a country like ours, a country that has lost most of its global political clout—that is now just another trading nation—should be in possession of such a force for good. This is the spirit in which people work for the World Service. And this is the spirit in which the British taxpayer should support it. Cut overseas development programmes. Cut defence spending. But don’t cut the BBC World Service. ★

John Ryle’s emotive description of what the BBC World Service means to its listeners (Friday Review, January 26), reminds me of a morning in Shanghai 15 years ago. China had only recently opened itself to tourists and I was in a bus which had stopped in the centre of the city. Within seconds, we were surrounded by between two and 300 Chinese, staring seriously and silently at the “Western devils”. Suddenly, someone pointed to me and said: “”She works for the BBC”. Immediately, every serious Chinese face was split by a smile and everyone was clapping. The clapping went on and on and on, probably for several minutes. Whenever a cut is announced in the World Service budget, I remember those Chinese.

We’ve been here before. In 1995 the Conservative government made a 20% cut in an already very modest BBC World Service budget. In response to cris de coeur from friends and colleagues at Bush House I wrote a column then in the Guardian under the title, “Save the World Service”; the paper ran a campaign with that tagline for some weeks afterwards.

The World Service outlasted John Major’s government. So was it saved just to be cut and cut again, cut until it reaches vanishing point? In the era of Wikileaks and Facebook, we need the World Service more than ever. This is precisely because, as many have pointed out, radio is not net-dependent. So it’s harder for the powers-that-be to it turn off. Unless, of course, you are the British Government and in charge of the purse strings.

The digital revolution marches on, continuing to transform the media landscape. But what I wrote about World Service radio in the 1990s—and again in 2011—remains true.