The magic of bioelectricity 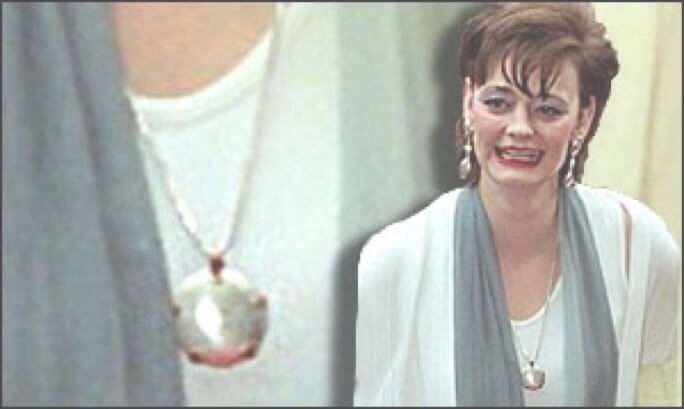 They say every man needs protection. And women and children too. If Cherie Blair thinks she needs a mystical shield to protect her against cell phones and cathode rays and other threats posed by the contemporary world, who are we to disagree?

This is the function, it’s said, of the natty silver disc the Prime Minister’s wife was seen sporting the other day at the opening of the film of Dr Doolittle. The Bioelectric Shield, as it is called, guards its wearer against emissions from electrical devices, and doubtless also from a whole range of stresses and strains of life: bad karma, alien abduction, ministerial rivalry and things that go bump in the night.

It has, accordingly, elicited scathing comment both from style gurus and connoisseurs of new age folly. And Mrs Blair has not been spotted wearing it since. Cabinet reshuffles have come and gone; the mystical pendant has remained unseen.

Last week, though, it was reported that the Prime Minister appeared with a tooth missing. Was it the tooth fairy? Or the effect of cathode rays? Electromagnetism? Witchcraft? Perhaps he too needs a bioelectric pendant.

What would Dr Doolittle do?

Hugh Lofting’s incomparable Dr Doolittle is a genial fantasy for children about a general practitioner who becomes an animal doctor in Africa. We can assume that it was not negative emissions from the film that Mrs Blair felt she needed protection from that day. What else can it be, then, but the pagers and mobile phones by which she is surrounded? It is mobile phones—Labour’s secret weapon in the election campaign—that have caused her to don bioelectric armour. If you believe what mobile-phonephobics say—that electromagnetic emissions drill into your head every time you key in a number—then the very communications miracle that kept Labour candidates on message during the election is what is now having an adverse effect on the Prime Minister’s wife.

The electronic juju that helped give them victory is extracting its price. New Labour, it seems, fries the brain. And the only cure is New Age therapy. Next, no doubt, we will hear that the Millennium bug poses a threat to the Millennium Dome, and that a giant bioelectric pendant is to be installed there to ward off chaos in the year 2000.

What would Dr Doolittle think of all this? And what would he do about it? He spoke the language of the animals, which makes him a bit new-age, but as a medical practitioner he was orthodox. Not even a touch of homeopathy for Prince Bumppo, his African celebrity patient. The most Dr Doolittle would have recommended to a stressed-out politician’s wife would have been a cup of tea. Not good enough for today’s political seekers after inner peace, it seems. They must have soothsayers and astrologers, Princess Diana-style.

Is the new age device the Blairs have been using powerful enough, though? Perhaps they need to look to Africa, as Dr Doolittle did. Maybe they should consult Charles Taylor, the President of Liberia. Taylor, a devout Baptist, carries a magical stick with him at all times. So worried was he about evil spirits in the presidential mansion after the civil war (in which he played a major, sanguinary role) that he had the place exorcised, room by room, by church elders from every Christian denomination in Liberia. There were seventy of them, it was reported. This was because Taylor, an ardent numerologist, believes that seven is his lucky number. A purification ceremony like that could go down a treat at Downing Street, where there is so much blood on the carpet. 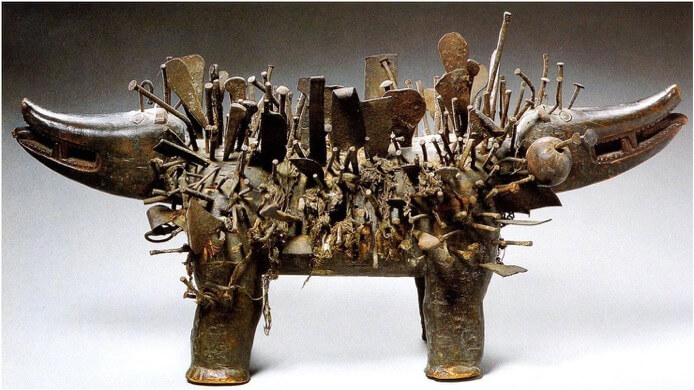 Or consider the heritage of African artefacts in British public collections. An exhibition at the Royal Academy a year or two ago featured a ritual object from Angola called a nkisi, a terrifying-looking ritual sculpture in the form of a double-headed dog, Kozo, which is normally on exhibit in the British Museum. Scholars translate nkisi as “power object”. And the dog Kozo would give even Cerberus a fright, covered as he is in congealed blood and honey, with nails and horribly stained blades of hoes hammered into him, the residue of decades of ritual performance. These blades (which, now I come to think about it, may well have bioelectrical properties) look alarming even to the secular imagination.

A children’s guide to that Royal Academy exhibition offered reassurance to anxious parents.

“Now that Kozo belongs to a museum,” the guide informed readers, “he has lost his power.”

But, I asked at the time, how do they know this? The power of this alarming creature could be restored if he was removed from the museum. And so he should be. National security demands it. The dog Kozo would make a perfect pet for the Blairs, a multicultural guard dog—a subtle adaptation of the tradition of the British bulldog, driving all evil forces away: a canine to restore the Prime Minister’s lost tooth, to guarantee civility between rival ministers, and keep electromagnetic rays at bay. ★