Pick up a glossy magazine; get the store thrown in for free 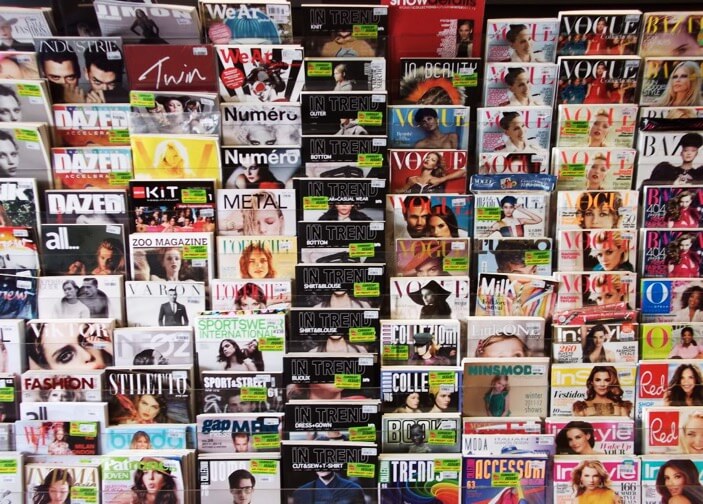 It strikes you at the airport bookstore. And at the street corner news stand. It strikes you at the train station and at the stationer. It strikes you as you hover, rapt, before sprawling racks of periodicals, cruising like a bee along a herbaceous border. The relation between books and magazines has been turned upside down. In the world of print media today there is a slow but inexorable shift: bookshelves shrink and books repine, while magazines—especially slimming magazines—grow ever more plump.

Not content with this cetacean gloss and bulk, magazines have come up with an increasing array of extras: product samples, sachets of perfume, cover CDs—bells and whistles, mirrors and beads. A glance into the luxurious interior of one of these publications has leaflets pouring onto your feet, glittering and seductive, as thick as leaves that strowed the brooks in Milton’s Vallambrosa. Pungent odours from perfume advertisements fill the air, like offerings at a shrine.

A multi-sensory bundle of merchandise

It’s been argued by the American critic Robert Tashman that the growing dominance of magazines over books owes something to the fact that they are closer in spirit to television, to the world of the screen. Magazines are gaudier than books, more designerly, more of the moment. Their content can more easily be subordinated to form.

The new generation of magazines also has something TV doesn’t have: feel and smell. On your computer there is, as yet, no scratch-‘n’-sniff facility, no odour icon. Pheromones cannot be digitised. But these days, such is the generosity of advertisers, your physical copy of Harper’s Bazaar or Vogue has an elaborate sequence of scents programmed into it, a heady, mesmerizing whiff from a dozen perfume ads.

With the samples attached to the cover, the magazine becomes a multi-sensory bundle of merchandise, a package of fetishes, a chocolate box, designed to arrest the attention and tickle the fancy of wandering consumers. So that you may find yourself wanting to eat the magazine instead of reading it. And wondering if a perfume could be devised that would contain within itself the entire spectrum of olfactory sensations to be derived from flicking through a copy of Harper’s or Vanity Fair. I Glossii, it could be called, this Überparfüm. Or Tina.

As magazines burgeon, books become smaller and more austere. The publishing novelty of the year has been the thirty-or-forty-page very-small-indeed book pioneered by Penguin. With the ascendancy of perfect binding (that is to say the paperback, where pages are glued rather than sewn together) there’s no longer much difference, physically, between a book and a periodical. If anything, magazines are better-made, with higher quality printing and paper. This month’s Vogue could still be relatively pristine when the paperback book you just bought is turning brittle and yellow from the sulphite traces that linger from the paper manufacturing process.

In recent months the beads and mirrors attached to each issue of the big magazines have diversified. The latest offering is the very commodity that they seem to be supplanting, a book. Having displaced books in the marketplace, the glossies now seek to incorporate them. It’s an odd sight: magazines with giveaway paperbacks attached to their covers, like lifeboats on the davits of a cruise liner, dwarfed by the size of the mother vessel..

In this month’s crop an entire Richard Ford novel is squired by Esquire; Cormac MacCarthy rides shotgun on GQ; Rachel Cusk is chaperoned by Elle; and Barbara Trapido peers from beneath the skirts of Harper’s and Queen. The commercial logic is this, one imagines: the author has a new book just out and the publisher offers a paperback edition of the old one as bait. Or else there’s cross-marketing going on, vertical integration—that is to say, the books are published by companies that are owned by companies that own the companies that publish the magazines.

How much wider the choice of giveaway books could be if they were freed from these marketing constraints. Given away free with Vanity Fair there might be copies of works by William Makepeace Thackeray or John Bunyan, and, with Tatler, essays by Addison and Steele.

In Marie-Claire’s literary section this month the trouvée of the season is to be found: a writers-at-work glimpse of the novelist and biographer, Peter Ackroyd. Here it is in case you missed it.

…and my assistant Carl insists that I have a large breakfast of mushrooms, baked beans and tomatoes on toast… I often wear just a gown. It might be Yves St Laurent—either in blue or white—depending on my mood. I like to wear pink in summer.

Perhaps this is a teaser for yet another innovation in the seduction of the magazine reader: free limited edition designer bedwear bearing the endorsement of a grand écrivain. Proust’s pyjamas. Richard Ford’s ripped T-shirt. Or is Marie-Claire softening its readers up for a giveaway edition of Sartor Resartus? Hold your breath for next month’s issue. ★